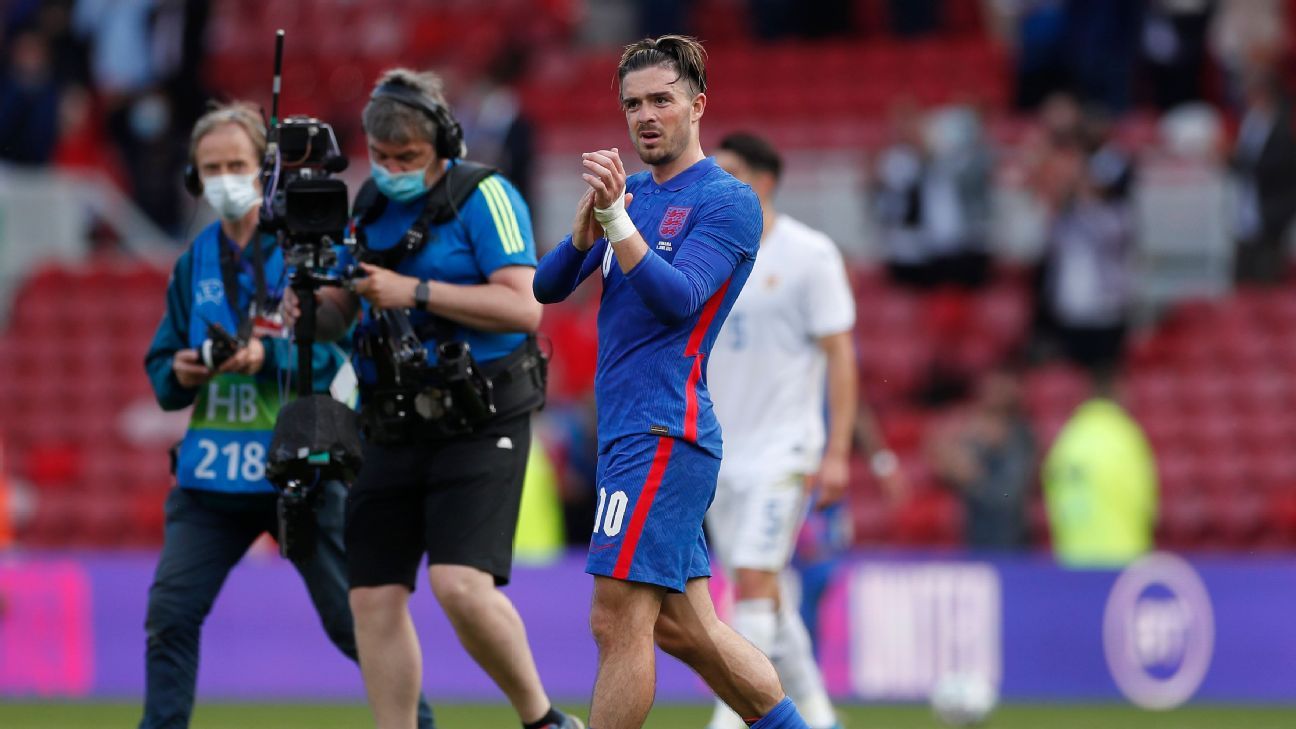 MIDDLESBROUGH, England — It took a while for Gareth Southgate to be convinced of Jack Grealish‘s worth in the England national team, but the Aston Villa midfielder now looks primed to get his chance at Euro 2020.

England’s two warm-up games have effectively been an exercise in damage limitation, with several players managing their recovery from injury, others joining up late after prolonged club engagements and a disappointing sideshow around England’s players being booed by some crowd members for taking a knee before kick-off.

Southgate named two vastly different line-ups and secured two 1-0 wins, the second of which came on Sunday against Romania in their final outing before next weekend’s opening Group D match against Croatia. Speculation will now begin in earnest about how Southgate will arrange the leading lights of an attack-minded squad, whether he persists with the 4-2-3-1 shape he used in both games here at Middlesbrough’s Riverside Stadium or returns to a 3-4-3 that appeared his preference earlier in the season.

The case for Grealish being integral to either plan is growing. He settled this contest by winning the penalty that was converting by Marcus Rashford with 22 minutes remaining, duping Romania substitute Tiberiu Capusa into making contact in the box. It wasn’t a vintage display from Grealish, in his seventh appearance, but he was lively throughout and ultimately created the moment that secured victory.

Although Southgate declined to use Chelsea or Manchester City players in either warm-up game — they only joined up with the group on Friday following their engagement in the Champions League final — it feels significant that Grealish was utilised initially as a No. 10 in both matches. He moved out to the left when England switched to a 4-3-3 shape during a plethora of second-half changes, displaying a versatility that Southgate has come to value. It didn’t matter that Grealish is still rebuilding his match fitness, having only returned to action on May 13 after three months out with a shin problem.

“We’ve seen with Jack in the two games that he has those moments where he can really turn matches,” said Southgate. “He obviously did that from the left in this instance. We pushed him out there by that stage so it has been very useful for him to get those match minutes under his belt, to get closer to full match sharpness. That’s been valuable for several of the players as well.”

The 25-year-old has also been handed the No. 7 shirt, a symbolic gesture that hints at a significant role during the finals, and one Rashford feels he is ready for.

“Grealish is a great player,” the Manchester United striker told ITV Sport. “He’ll definitely grow and grow in an England shirt and we now from training and from the Premier League what he can do.

“For us, it’s just about allowing him to reach that full potential in an England shirt. We’ll get that out of him. We’ll win more games with him.”

There is fierce competition within the squad for those attacking places — not least from Rashford himself, given that Harry Kane will return to lead the line, but also from Raheem Sterling, Phil Foden and Bukayo Saka. (The latter has a “minor hip flexor” injury and is expected to return to training in the next few days.)

Grealish, the most fouled player in the Premier League over the past two seasons, showed some promising link-up play with Rashford, but England were once again reliant on a set-piece to win them the game, even squandering a second penalty late on when Jordan Henderson‘s effort was saved on his first appearance since Feb. 20.

England scored nine goals from set-pieces at the last World Cup — the highest number since records began in 1966 — and although they possess more dynamic and differing options in 2021, the importance of dead-ball delivery remains high. That reliance means James Ward-Prowse has a strong case for taking the final place in Southgate’s 26-man squad. The Southampton midfielder excelled in that capacity on Sunday, providing pinpoint free-kicks and corners from which England really should have taken advantage.

Trent Alexander-Arnold‘s thigh injury has created an opening for a set-piece specialist and the Football Association are due to announce the Liverpool defender’s replacement tomorrow. Ward-Prowse is in contention, along with Jesse Lingard and, perhaps, a defender in either Ben White or Ben Godfrey. But given his ability to play right-back and Southgate’s affinity for a player he worked with in the Under-21s set-up, Ward-Prowse is surely favourite.

Southgate will take stock on a day when the football was marred by a sizable number of the 6,952 fans booing their own team as they took the knee, despite a clear, typically thoughtful and impassioned explanation of the team’s stance from the 50-year-old manager before kick-off. As if to underline the social responsibility many of these players have assumed, free school meals and anti-racism campaigner Rashford was named captain, the youngest England skipper since Michael Owen versus Slovakia in 2003. Yet the fans’ mixed response to taking the knee means the issue will continue into the tournament, despite Southgate ideally wanting to focus on selecting his most effective line-up.

“There’s got to be a balance to any team and there’s a numbers game to be played,” he said. “In the past couple of games, we’ve got four attacking players into the team. Different teams have different ways of doing that. Chelsea just won the Champions League playing with a three. We’ve got to find the right balance, find the players that are in form and the right players for different games.”

At least Grealish has done plenty to feature prominently in his thinking.