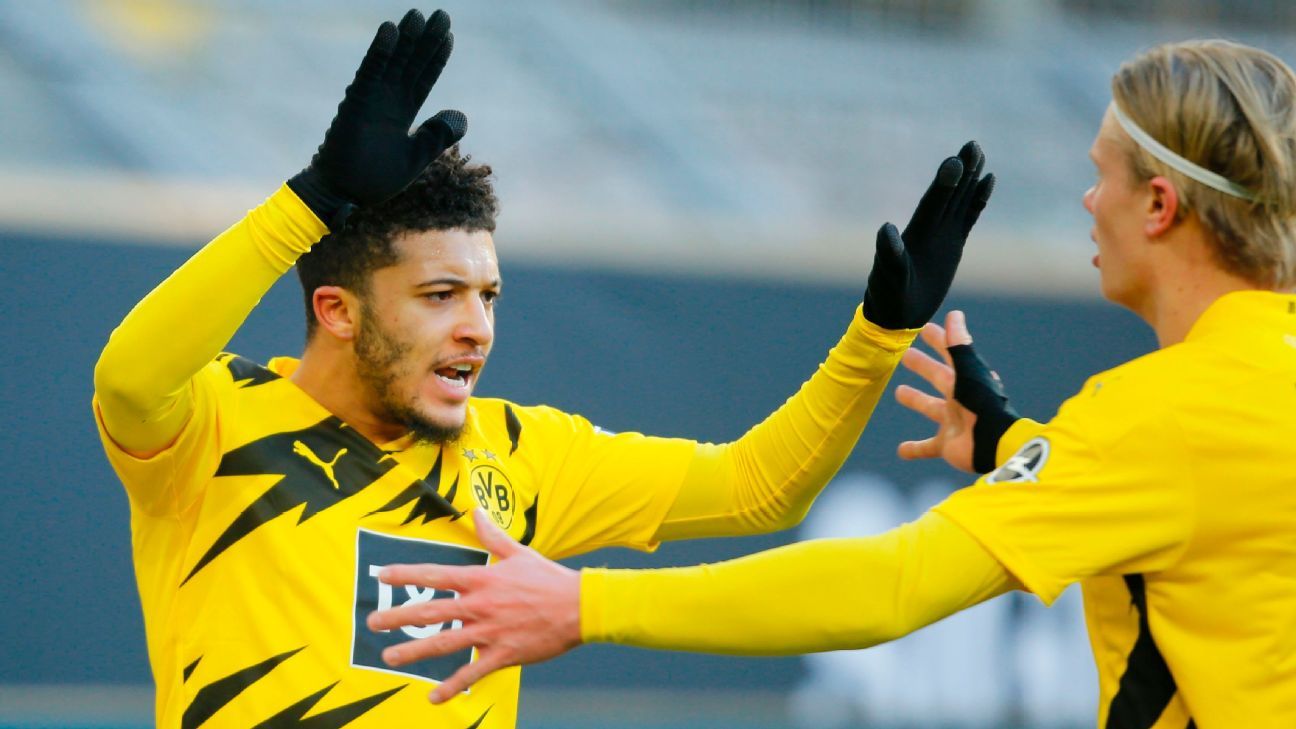 With most of the major European seasons now complete, the rumour mill has been sent into overdrive as clubs ponder their moves ahead of what will be a busy transfer window. Check out the latest gossip below, and see all official deals here.

Borussia Dortmund have lowered their asking price for Jadon Sancho‘s services, with the Sunday Mirror reporting that the Bundesliga club will demand a fee of £81.5 million for any clubs interested in landing in-demand England winger.

Sancho was valued at £108m last summer when Manchester United were locked in negotiations with Dortmund, but the latest asking price could see talks advance closer to an agreement in the coming days.

Transfer journalist Fabrizio Romano reports that United have already restarted negotiations, and meeting the German club’s demands would break the club record transfer fee that saw Harry Maguire move to Old Trafford for £80m in 2019. It’s reported that there has been no move from Liverpool despite interest from Jurgen Klopp.

Sancho remained a key feature in Dortmund’s success last season, with 16 goals and 14 assists in all competitions.

15.30 BST: Fernandinho will be out of contract at Manchester City in just 24 days, but Pep Guardiola is still hopeful that the midfielder will sign a new one-year deal.

The 36-year-old will, according to the Sunday Mirror, be tempted with the offer of a longer-term association within the City Football Group when he retires.

Neves, 24, is expected to be made available this summer as Wolves start a rebuild under incoming manager Bruno Lage. Arsenal’s interest comes after it became clear that Odsonne Edouard of Celtic will turn the Gunners down to sign for Leicester City. Mikel Arteta also seems set to miss out on Norwich midfielder Emiliano Buendia, with Aston Villa having met the valuation of £33m plus add-ons.

With two years left on his contract, Neves could be available for around £40m — though that would wipe out most of Arteta’s transfer budget.

Pedro Neto and Adama Traore may also be sold by Wolves to raise funds to reinvest in the squad.

14.01 BST: Barcelona are concerned that Ousmane Dembele has already to sign for another club in the summer of 2022, according to Mundo Deportivo. Barca are keen for Dembele to sign a new deal but his agent is dragging his feet, to see if Dembele’s value goes up after Euro 2020.

Barca are suspicious that his reluctance to sit down and negotiate means that the player has already reached a preliminary agreement with another team ahead of January 1, 2022, when Dembele will be free to talk with any club.

Dembele, 24, joined Barca in the summer of 2017 from Borussia Dortmund. He scored 11 goals in 44 appearances for Barca last season.

13.15 BST: Gab Marcotti is at as loss as to why Georginio Wijnaldum‘s club future still isn’t sorted for next season. Will the former Liverpool midfielder be at Paris Saint-Germain or Barcelona?

Gab Marcotti is at odds as to why Georginio Wijnaldum’s club future still isn’t sorted for next season.

Pau Lopez, No. 1 last season, faces months out with a shoulder injury while Robin Olsen, who is returning from a loan spell at Everton, is not expected to be first choice.

11.44 BST: Spanish outlet Sport is reporting that Barcelona‘s rebuilding plans are being held up by delayed moves for free agents Memphis Depay and Georginio Wijnaldum.

Wijnaldum, who leaves Liverpool this month, now looks most likely to sign for Paris Saint-Germain, according to ESPN sources, after Barca failed to secure a precontract agreement.

Depay, meanwhile, has been stalling on agreeing a free transfer from Lyon but with Ronald Koeman confirmed to be staying on as coach the forward could sign this week. He will turn his back on offers from Juventus and Inter Milan to commit to the Camp Nou club.

Barca want to sell three of four players before the end of the month, but will only work on outgoings once they have answers from Depay and Wijnaldum. Any funds raised could be reinvested in the squad.

11.01 BST: With the summer window set to open, clubs across Europe have been making plans to address their areas of need. Who will come in? Who will go? And which stars will have a new club next season?

Check out our transfer window preview.

10.18 BST: The Sunday Mirror reckons that Kieran Trippier has told his England teammate he wants to sign for Manchester United this summer. Trippier, 30, enjoyed a fine season in La Liga with Atletico Madrid, winning the title and being named in the Team of the Season.

The report states a fee of £15-20m will land the full-back, who could provide competition for Aaron Wan-Bissaka. Though as Wan-Bissaka can’t get in the England squad ahead of Trippier, we think the former Spurs and Burnley man would expect to be first choice!

09.30 BST: Real Madrid goalkeeper Thibaut Courtois is convinced Belgium compatriot and club teammate Eden Hazard will still be at the club next season.

Hazard spent seven successful seasons at Chelsea before joining Real Madrid as the club’s record signing in the summer of 2019, but he has failed to live up to expectations. Hazard has scored four goals in 43 appearances and has suffered 11 injuries since his arrival. Marca has reported that the 30-year-old striker has been placed on the transfer list.

“I’m 100% certain that Hazard will remain,” Courtois told Le Soir: “Hazard doesn’t want to leave, that is something the media are saying. His biggest desire is to continue playing without injuries and winning titles.

“Moreover, at Real Madrid everyone is criticised, including [Gareth] Bale, who scored twice in the Champions League final.”

Hazard’s value has dropped significantly following two disappointing campaigns in Madrid. He is currently on international duty with Belgium preparing for Euro 2020.

– Sparta Rotterdam‘s Abdou Harroui is attracting interest from multiple Premier League clubs, according to Football Insider. Leeds United and Brighton have joined the race for the central midfielder, who has recently featured at the European Under-21 championships with Netherlands, and with the 23-year-old out of contract next summer, clubs interested could be able to negotiate a bargain price to secure his services.

– Arsenal would be willing to let Edward Nketiah go for £20m this summer, according to Football Insider. Leeds have previously been interested in the attacker, who had a loan spell with Marcelo Bielsa’s side in the Championship, though the Gunners’ latest stance on the 22-year-old could ignite further interest.

– Barcelona youngster Ilaix Moriba is in line to receive a new contract from the club, according to Marca. It was previously suggested that Barca were looking to sell the 18-year-old prospect, but it now looks as though the midfielder is in Ronald Koeman’s plans for next season. Ilaix featured 14 times for Barcelona last season while contributing three goals.

– Tottenham Hotspur are turning their attention to Ajax manager Erik Ten Hag, reports the Sunday Mirror. Ten Hag is the latest name to be linked with replacing Jose Mourinho after Daniel Levy’s talks with Antonio Conte broke down. The Spurs hierarchy are believed to be long-time admirers of the Dutch manager after coming up against his Ajax side in their run to the Champions League final during 2019.

– Carlo Ancelotti has set his sights on Sevilla FC defender Jules Kounde as one of his first signings as Real Madrid manager. That’s according to Foot Mercato, which says that signing a central defender is a priority for the Italian boss this season, though a deal for the France international would cost in the region of €80m.

– Bournemouth are considering adding left-back cover with Colombian Gabriel Fuentes on the radar. The Sun reports that the fee could be as little as £1.3m to secure the Atletico Junior star. The 24-year-old played in 24 matches last season.

– Liverpool defender Neco Williams is on the radar of Norwich City and Burnley, according to TeamTalk. Both clubs are reportedly interested in a loan deal for the 20-year-old right-back who has been providing cover for Trent Alexander-Arnold and has recently been selected for the Wales Euro 2020 squad.

Chalobah, James step up as Chelsea veterans threaten to move on
Man United decided to act fast to land Rangnick
Jota 8/10 as Liverpool rout Southampton at Anfield
Future of Ligue 1 ‘at stake’ after latest fan violence
Haaland scores on comeback in Dortmund win